Economic Justice in An Unfair World, By Ethan Kapstein (A Review) 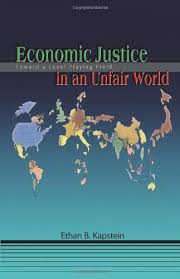 It is usually the case that books on "distributive justice" either tend to be abstract yet detailed, or largely empirical but unsatisfactorily brief. Economic Justice in an Unfair World aims to narrow the divide by offering a model of international justice that is both theoretically credible and realistic enough to be applied by the undefined "international community".

According to Kapstein, approaches to economic justice typically falls between two extremes that influence competing nations’ attitude towards international engagement. “Communitarians” approach international relations largely from a “national perspective”. Within this framework nations prioritise domestic social and economic arrangements, engaging the international community only in line with what is purely good domestically. “Cosmopolitans” adopt a “global citizens” approach, viewing economic justice as fundamentally being about individuals. This view has tended to dominate thinking among international NGOs and works itself out through significant emphasis on poverty reduction for poor nations.

In Kapstein’s view both extremes are largely deficient on both theory and practice. Communitarians ignore that in an increasingly interdependent and politically uncertain world, the actions of nations carry significant external costs which are most efficiently internalised through greater international cooperation. Equally, cosmopolitans preoccupation with poverty reduction for the poorest is unrealistic, and might run counter to the need for allowing individual countries to determine the course of their history. A better alternative, Kapstein argues, is a view of economic justice that harnesses self interest as espoused by communitarians, whilst fulfilling the broader goals of increased social welfare globally pursued by cosmopolitans. Such an approach necessarily requires a “liberal internationalism”, that provides a secure international platform where individual states can engage each other for mutual advantage.

The challenge for the "international community" is to devise international arrangements that are “inclusive, participatory and welfare enhancing”. Crucially such arrangements necessarily must focus on the “equality of opportunity” at the nation rather than individual level if the ideas are to find international traction. Much of the book is effectively taken up illustrating the supposedly positive implications of “liberal internationalism” in areas of aid, trade, migration, labour standards and investment.

Kapstein succeeds in demonstrating that economic fairness and justice need not be polar opposites provided a coherent framework can be implemented that demonstrates mutual advantage. But that is where it ends, as the book gets caught up largely between a theoretical / academic proposal and agenda for change. In the end it achieves neither. As a theoretical exposition there’s nothing new and as an agenda setting book, it misses important areas.

A major weakness is the false dichotomy on which Kapstein’s analysis rests. The policy choices facing nations are presented as a essentially a multiple choice - you are either a cosmopolitan or communitarian or liberal. There's minimal discussion of why complementary approaches cannot work. Implicitly it's perhaps because Kapstein believes liberal internationalism is the most fair and efficient. Fair because it allows, in his view, the most people to benefit, something the book does not even begin to prove empirically. Equally problematic is the undefined concept of efficiency.

In practice, many of the problems facing developing nations should rightly continue to rely on a blend of communitarian, cosmopolitan and liberal internationalist ideals. We see positive communitarian ideas reflected in strong arguments for some degree of protectionism for emerging small industries in poor countries, as basis for developing capacity. Cosmopolitan initiatives have proved useful in directly empowering the poor where the distribution of power in society is heavily stacked against them. Finally, liberal internationalism as presented in the book remain important as nations pursue mutually beneficial arrangements in areas of trade and investment to foster global wealth and opportunities among nations.