Reforming the Unreformable, By Ngozi Okonjo Iweala (A Review) 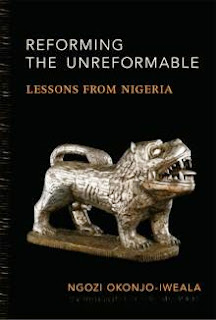 In 2003 Nigerian President Olusengun Obasanjo invited Ngozi Okonjo-Iweala to return to Nigeria from the World Bank and become the country’s Finance Minister. Her primary task was to sort out Nigeria’s economic mess which had been inherited from previous successive military regimes. The country was practically on its knees after years of rampant inequality, pervasive corruption and power struggles at the top. What was previously a diversified economy had increasingly become a mono economy perpetually dependent on a poorly run oil sector. Economic growth was excessively volatile, with spending largely tracking changes in oil prices. The Obasanjo administration was saddled with inefficient state-owned enterprises crippled by rising debts and pension liabilities. Political patronage was rife, with over 5,000 boards’ seats in state enterprises maintained purely for political expedience. Nigeria was virtually bankrupt.

Okonjo-Iweala’s Reforming the Unreformable is a narrative of how she assembled an economic team that sought to fix everything within a period of three years. As she puts it, "it is the story of development economics in action, drawn from the front lines of economic reform in Africa". Okonjo-Iweala penned the book principally as an attempt to offer lessons to policy makers grappling with how to bring about reforms in low income countries. She also believes that Nigeria’s reforming lessons during the Obasanjo years offer wider global lessons. The reforms demonstrate that great challenges present great opportunities to reposition the economy – which can be a springboard for steadier, more diversified long term growth. In that vein the book speaks directly to today’s global financial and political challenges in both the developed and developing world. Other countries can learn from how Nigeria went about reining in debt, manage volatility, build credibility with investors and become an economy that saved for the future. But it is also personal. Okonjo-Iweala seeks to go “on the record” and offer a defence of some of the controversial policies that were undertaken during that short period of time, and in passing acknowledge the courageous men and women who help restored Nigeria to a stable economic path. In doing so, she hopes to inspire the next generation of reformers, at home and abroad, infusing them with a passion for continuous democratization and reform.

The book extensively showcases some of the major reform successes. An early introduction of a fiscal rule helped reduced economic volatility by linking the national budget to the long term changes in oil prices. Budget planning reforms put in place a clear development programme that now guides Nigeria’s spending at national, state and local government levels. Privatisation and deregulation of key sectors helped ensure long term economic growth by allowing a greater role for the private sector which led to the inflow of foreign direct investment in key sectors e.g. telecommunications, banking. Tackling corruption and recovering money from abroad, were rewarded with a significant repatriation of funds from Switzerland which had been siphoned from Nigeria during the Sani Abacha administration. Above all, Okonjo-Iweala successfully secured debt forgiveness which helped Nigeria have a fresh start and enable it to build foreign reserves.

Perhaps the greatest strength of the book is how Okonjo-Iweala opens the lid on the complexity of undertaking reforms in Africa. Particularly, the challenges from the elite who benefit from existing mismanagement and have access to political power. She also shares insights on the challenges of introducing change where a culture of entitlement has taken hold, as was the case in her unsuccessful struggle to remove costly oil subsidies. Her openness on the areas where reforms could have been better executed also adds to the book’s credibility.

However, these strengths must be balanced against the inevitable weaknesses. Many of the successes mentioned in the book are not entirely due to the reform effort. Indeed, reading through the book it is often difficult to decipher which bits of changes were entirely due to her, and what can rightly be attributed to others. It is not as clear cut as people may expect. Similarly, the measures of success are not always easy to judge. For example the privatization process and other structural reforms led to many companies being sold, but there is no sense of how sustainable those companies became after privatization or whether the process simply led to more unemployment. Separately, some readers may sense that Ikonjo-Iweala’s narrative as an air of the “philosopher kings” feel about it, with no clear sense that the people may have at times known better. The reform approach seemed at times rather top down rather than bottom up. She puts many of the challenges they faced down to lack of communication and politics, but it seems at the heart of the dislocation may have simply been competing visions of development. How should these differences between the top and the bottom be handled? This is not discussed.

However, these concerns do not distract from the general powerful contribution the book makes on the politics of economic reform. It is an insider’s account that is broadly objective and therefore makes it compulsory reading for those interested in reforming poor countries. More such books are needed by Africans. Throughout Ngozi Ikonjo-Iwela’s determination, intelligence and love for her country shines through. Here is a bold and intelligent African woman who took on the vested interests of her country, counted her losses and helped put the country on a sustainable path. It is a book that deserves wide reading.