December 03, 2013
I recently went through a series of old Denzel Washington movies. I started with the Bone Collector(1999). Lincoln Rhyme (Denzel Washington) is the quadriplegic forensics expert, following a tragic accident at work, whose plans to commit assisted suicide are interrupted by a sadistic serial killer on the loose in New York. 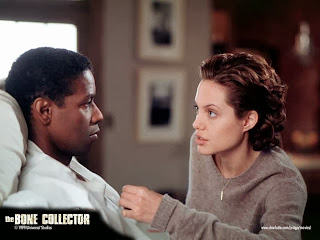 With time counting down between each abduction and possible death, Rhyme recruits the unwilling but talented rookie Amelia Donaghy (Angelina Jolie) after she saves the first crime scene. Through radio contact, she becomes his eyes and legs on the scene, even as she battles her private challenges.

The movie is beautifully crafted around the novel idea of a bedridden detective. The character build up is superb supported by strong performances from Washington and Jolie. At the general level it is all about chasing a menacing killer. But underneath it we are exposed to the fascinating inner battles the lead characters must must win to solve the crimes.

The theme and imagery of human darkness and paralysis is all over this film. Rhymes is wrestling with a life that has not become what he hoped to be. He is physically paralysed and emotionally burdened by personal tragedy. He fears becoming a vegetable unless he can end his life now. Amelia is dreams are overwhelmed by the tragic death of her late father. To beat the killer they must both overcome these fears.

As Amelia tries to quit new responsibilities, Rhymes thunders that the key for Her success is to recognise that "we are all a product of our choices" and that "destiny is what we make it". Faced with her emotional paralysis she needs to dig deep! The irony of course is that the would be physician of the soul is failing to heal himself! Rhymes has already given up on life by choosing death through assisted suicide.

With the futility of the supremacy of the human will exposed, the film appears to draw our attention to a more nuanced picture. Amelia and Rhymes are each other's answer to their problems. Amelia’s history with suicide is key to rescue Rhyme's path of suicide. He needs her intellectual, physical and emotional connection. We may even go further and suggest that it is beautiful Amelia's ability to see in him something beyond the incapacitation that ultimately rescues him from the brink of suicide. Are these hints of the film's nod to the necessity of unconditional love? We can't be sure, but the looks of Amelia are not accidental!

Similarly, it is Rhymes determination to solve the crime that helps Amelia realise her talents. For all her beauty and brilliance, Amelia suffers from deep feelings of inadequacy. She fears ending up like her father. Her past is holding her back. She succeeds to overcome this by the encouragement of Rhymes mentoring. He becomes a sort of “father figure” and the affections for each other grows. She gives him the future whilst he restores her past. In the end they live for each which ultimately leads to the crime being solved.

The serial killer is the anti-thesis. He turns out to be a man who who has come to blame others, particularly Rhymes, for how life has turned out for him. He fails to take responsibility for his actions and has not reached across for human help! And when he tries to forge his destiny built on revenge he ultimately fails! Through this result the message of the movie is therefore wonderfully reinforced. Help is crucial!

However, even as the message appears positive we must not forget it remains deeply anthropocentric. The film is asking a basic question : how do we overcome paralysis in our own lives? It's answer is that we are responsible for our own actions and have the capacity to make positive decisions to change our lives. However, to do that we need help from the other members of the human race to help us make right decisions.

There's certainly truth in that. King Solomon said, "he who isolates himself breaks out against all sound judgement". And we should also acknowledge that our suffering can be the key to bringing healing to someone, even ultimately justice! As King Solomon said elsewhere "by wise guidance we wage war" and that a "cord of three is not easily broken". We need others to make it in life, period!

And yet it is not period! Christian understanding of human paralysis does not begin with man. It begins with God (it is theocentric or Christocentric). We are fallen human beings who cannot do it on our own. We first need God's help through Jesus Christ who has experienced human paralysis and therefore able to help us in our times of weakness.

This reliance on Christ does not eliminate our role to help others. On the contrary, as Apostle Paul wrote in his second letter to the church at Corinth, God comforts us..."in all our troubles, so that we can comfort those in any trouble with the comfort we ourselves receive from God".

The big challenge of suffering is that in that very moment it appears that our lives are being wasted! But no Christian suffers without purpose because our suffering is greatly valued by God. And one of these reasons it is valued is because it is the means through which God works to comfort others. Our current paralysis is the key God wants to use to unlock comfort in another person’s life!