Why do we long for darkness?

April 26, 2014
The horror suspense movie Mama (2013) tells the story of young girls Lily and Victoria who have been rescued from a cabin after five years in the woods. At the time of their disappearance Lily was only a baby. Now she has grown up a little bit raised by a strange mysterious dark figure called Mama. Five years earlier Mama had killed their father just as he was about to commit suicide and possibly kill the children. 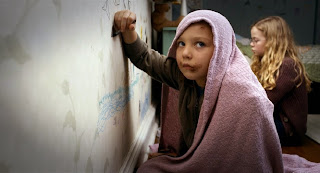 Mama has come to view herself as a guardian and provider of the girls, especially the youngest Lily. And though Lily has left Mama and the woods physically after the rescue it becomes immediately clear that the woods and its darkness has not left them. She lives in a comfortable nice house and yet cannot bear to sleep on the bed. She crawls on the walls, resents her uncle and his girlfriend and does and say all sort of strange things. In one moving scene Lily hears Mama calling out to her and sneaks out of the house from a very high window, almost like an animal. The following day she is found sleeping outside in the trees!

Watching the movie reminded me that in a way we are all like Lily. There's a part of us that craves the darkness no matter what the Light has to offer. A point reinforced recently when I was watching a BBC programme about homeless people [Back to the Streets]. In one episode a homeless man is put in a comfortable house with all modern necessities as part of taking him off the streets. Only for him to start sleeping outside. The new environment proved too alien for him. He longed to be on the streets again rather than live inside.

Why do we have this tendency to long after the darkness?

The movie's answer is that it is all about how we are nurtured. Whilst it is clear that Victoria and Lily are afflicted by the life in the woods, it is Lily's continous longing for the darkeness on which the central moral question is defined. Why does Lily run after the dark and Victoria incresingly rejects it? Why is Victoria making progress when after being rescued both of them are subjected to the same level of care and luxury?

The viewer cannot help but logically conclude from the narrative presented in the movie that the reason Lily is having a tougher time to adapt than Victoria is because all her life she has only lived in the bush and has had a ghost for a mother. The slightly older sister on the other hand has had a much broader exposure to life, with more years spent with her real parents, which translates in different emotional connections and ultimately divergent choices. In short the movie's message is that its the full totality of how we are raised that matters not whether we are born evil or not. In some ways we are victims of circumstances. If only Lily was as old as Victoria she would be saved!

The message goes further. Towards the end Lily chooses the dark decisively. A choice that would otherwise be a "bad outcome", but not in this movie. Here the viewer is asked to celebrate that Lily has chosen the dark [indeeed death] despite the temporal severance from her sister because it seems she has chosen where she belongs. Just as we are to celebrate that Victoria has become rehabilitated because she rightly belongs to the normal world. The movie appears to uncomfortably encourage us to believe that once we accept that we are a product of how we are nurtured, being true to that is all that matters (and brings happiness), even if it brings death and separation.

The bible readily agrees that we are to some degree a product our environment. The world around us influences our everyday decisions. This is why parents are commanded by God to bring up a child in a biblical way so that when the child grows she does not depart from it. It also calls on followers of Christ to resist the world and it's cravings because it recognises that the world we live in is a broken world that pulls us away from God.

However, the Bible goes further. It says our very nature is sinful. We are to products of darkness. There' something in us that pushes us to the darkness regardless of how smart or knowledgeable we are. This sinful nature is in all of us to the point that the Bible says, we are by nature "children of wrath". In short, we have a sinful nature and are living in a sinful world. And that is not something to celebrate, as the movie dangerously encourages, it is a desperate position that needs God as Saviour.

And yet as I reflected on Lily I couldn't help to think that she is also a picture of innocence. She is no more than 2 years when "mama" invades her life. And that reminded me of the innocent couple that strayed after darkness. They were properly nurtured by God and without sin. And they still strayed after darkness. How can this be? How is that Adam & Eve can sin in perfection and full of God's boundless resources and care?

We will never know the answer in this life. But it should remind us is that even in our perfection we need God's grace to keep us away from darkness. And of course the best form of deliverance and protection  is the blood of Christ. As Apostle Paul says, God has freed us from the power of darkness, and he brought us into the kingdom of his dear Son. The Son paid for our sins, and in him we have forgiveness (Colossians 1:13, 14).

In the end what closer reflection on the movie highlights is not just our desperate condition but also also the limits of human solutions. Only God can save us fully and eternally keep us protected from the darkness. Our knowledge and goodness cannot do it. Our relationships with other human beings or the world around cannot do it!