May 24, 2014
I have recently become drawn to the science fiction series Battlestar Galactica. It is set in a star system far away where Cylons and humans are struggling for dominance. As the series progresses you can't help but get drawn into the various characters and plots. It takes the life of its own and before long you feel you are part of the drama with your own favourite characters and heroes. You become part of a larger story, without in reality being part of it. I am on series three, and hope to say more about it in the future!  Why are we drawn to such fantasy stories?

This question has been ringing in my head particularly since I watched two fascinating science fiction documentaries earlier in the year. The first one was Jedi Junkies (2010) which features the world's most dedicated Star Wars fans. From lightsaber wielding martial arts academies to a filmmaker who built the world's only life-size Millennium Falcon. From a Monster Garage-esque sculptor whose professional livelihood is building custom lightsabers to metal-bikini wearing dancers who embody Slave Leia. The documentary is an eye opener into the fan's obsessions with the Star Wars franchise. 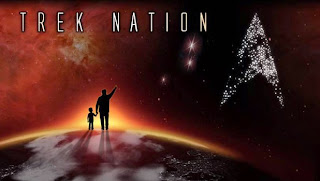 The second documentary I watched was Trek Nation (2011) which tries to examine the positive impact (no negatives) that Star Trek and creator Gene Roddenberry has had on people's lives as seen through the eyes of his son, Eugene Roddenberry (Rod). It includes interviews with cast members and crew from all five Star Trek incarnations as well as various fans and celebrities who were markedly influenced by the show whilst growing up. In fact quite fascinatingly, there's a part where Rod Roddenberry visits the Skywalker Ranch to interview George Lucas (father of Star Wars) to discuss any cross influences.

Whatever one makes of Star Trek and Star Wars one thing that cannot be doubted is that the fans are very devoted. I was really challenged by that and wished I was that passionate about God, as these fans are about their fictional programmes. After all God is real and Commander Data is not. But I was also more generally intrigued with what drives their commitment. These fans yearn to try and bring fiction into physical existence. They want to be in a Star Trek and Star Wars universe. Theyfeel awfully inadequate in the present world. Why is that?

Two authors I have enjoyed reading recently seem to answer this question with different language but essentially getting at the same point. David Paul Tripp in 'A Quest for More: Living for Something Bigger Than You' has this to say :

There is woven inside each of us a desire for something more—a craving to be part of something bigger, greater, and more profound than our relatively meaningless day-by-day existence. Maybe that's why a human being would ever want to climb Everest, traverse the oceans in an all-too-small sailboat, or attempt any feat not yet accomplished by a fellow human. Perhaps that's why we get hooked on politics, sports, or a myriad of causes that give us something to fight for. We simply weren't constructed to live only for ourselves. We were placed on earth to be part of something bigger than the narrow borders of our own survival and our own little definition of happiness. The desire resides in each of us, and it is called transcendence.

David Wilkinson in his excellent book 'Science, Religion and the Search for Extra Terrestrial Life' lists five problems all human beings face that explain the human quest to reach out to the stars  : a) cosmic loneliness - we feel isolated or alone in life;  b) cosmic purpose - we want to find out about the purpose of our lives in the universe; c) cosmic identity - we are all on the quest to find ourselves;  d) cosmic fear - there is a sense of vulnerability in the face of the universe and what surround us; and finally, e) cosmic salvation - we are looking beyond the present for hope.

I have found that these five reasons adequately capture not only why people are chasing for money, sex and power, but also why they take on science fiction personalities and live like they inhabit a different universe in the here and now.  These five challenges remind us that there's at the heart of the human existence a deep void. No matter how much money we have, how much love we receive, and what power we have, we can never be satisified.

History is littered with examples of men who have built their mansions and shriveled away in tiny rooms in those mansions, gradually estranged from family, friends, and at the end even themselves. Charles IX, who ordered the Saint Bartholomew's Day massacres, said at the end of his journey, "What blood! What murders! I know not where I am. How will all this end? What shall I do? I am lost forever. I know it." For all his power and brutality Charles IX ended life unsatisfied.

The question is why are we unfulfilled as human beings?  It is not because there's not plenty of things around us. The reason is that human beings were created with needs far deeper than the material universe can fulfil.  King Solomon said that God has "put eternity in the hearts of men" giving us a longing far beyond the present. To such an extent that even if we had all we wanted, at the end we will still cry, "meaningless, meaningless, it is all meaningless".

This is a truth that St Augustine recognised when meditating on God. He said "you have made us for yourself, and our hearts are restless until they find rest in you". The fall of man at the beginning of creation severed the ultimate link we have to the Creator and we are now left like ET desperately trying to dial home in any way we can. For some that process of dialling leads them to what the Jewish political scientist Louis Rene Beres has called the "Kingdom of the Herd" - just following the crowd and desperately hoping the answer comes from somewhere among the mob.

The appropriate response is to recognise with Sinclair Ferguson that "there is never enough in this world to satisfy us". Our needs are clearly serious and genuine. The problem is that no only are we broken and sinful human beings but we also live in a broken universe! Hence we have needs which can only be satisfied by someone larger than ourselves and the universe. Only God can truly satisfy us.

King Solomon gives us a sense of the problem when he observes, "just as Death and Destruction are never satisfied, so human desire is never satisfied". (Proverbs 27:20 NLT). Only something bigger than death itself can satisfy us. There really is a God shaped hole in our hearts, despite the shameful abuse of this truth by televangelists! And that whole cannot be plugged by movies, music or pretending to be happy people.

What we need is God himself to re-establish eternity and fill the void He has left behind. The great news is that God in Jesus Christ has already doe that by sending His Son to be the substitute penalty for our sins! Only when we embrace the Son do we find true fulfilment.