The Art of Dying By Rob Moll (A Review)

October 06, 2014
Death may not be an exciting topic but it is certainly an important, if often overlooked subject. Which is why Rob Moll's recent book The Art of Dying is a welcome publication. The book has been written to address the question of the good way to die. Moll believes our culture does not know how to approach death because we have become so removed from experiencing it. This is a problem because we can't live well unless we are intimate with death and know how to die well. The Christian approach, Moll argues, is  that death is both evil and mercy wrapped in one. Therefore there are significant benefits from knowing how to die well. 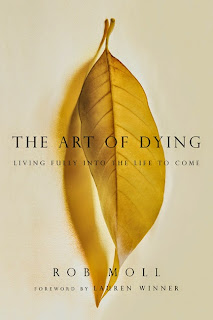 At the surface we should all be capable of dying well because people take longer to die than before which should offer plenty of preparation. The reality is exactly the opposite. For many Christians the allure of modern medicine has meant greater focus on self preservation and surviving at all costs than preparing well for death. Dying as a spiritual discipline has long been forgotten. .

This is in stark contrast to christians in past centuries who practised the art of dying (ars moriendi). They had come to recognise that death not only marks entry into God's presence, it is also tremendous opportunity to witness to those around us and heal the wounds of the community. Through dying well the old saints prepared the spirit for the next life whilst impacting the present.

So what then is dying well? According to Moll a good death is a Christian death. That is to say a death or funeral that seeks to reenact or re-express the gospel. This means for the mourning community revering the body, celebrating the life, re-knitting the community and offering hope to the world. Dying well begins prior to death. This requires developing a culture of resurrection. A culture where the elderly and the dying continue their presence in the church. For the aged finding ways for them to serve is important. For the dying, it is about the rest of the congregation seeing life lived and ended with hope and faithfulness.


At the heart of dying well is a strong belief  that though death is ugly, in the hands of God it is an art that he uses to sharpen us for himself. Many of us make every effort to avoid death or contemplate our own mortality. In the process we miss out on the benefits of living in light of death. Contemplating death rearranges our priorities and allows us to live lives that places God at the centre. We can avoid running away from death by building strong family relations, introducing he young to the old, and building strong support schemes. Those are the things that makes for dying well.

The book certainly makes compelling and thought provoking reading. Moll's observations of society's paradoxical attitudes to death are fascinating.  He rightly notes that whilst western society is fighting hard to expand the so-called right doctors and hospitals are astounding in their ability and passionate desire to rescue cancer sufferers, accident victims or heart-attack patients.

Christians too are guilty of the same self contradiction. We believe in the victory over the grave, but then totally avoids talking about it. We fear death and are afraid to talk about it because death is an evil, the horrible rending of a person from her body, from loved ones, from the ability to be fully in God’s image. And yet, as Moll rightly observes, “Death is indeed evil. Yet death is also a mercy; it is the final affliction of life’s miseries. It is the entrance to life with God. Life’s passing can be a beautiful gift of God”.

Unfortunately, these lucid observations about the nature of death never really get a biblical treatment of death. Neither is it explained how death can be a defeated enemy and yet still remains a tool in God's hand. Readers are left to fill in the blacks depending on the level of their biblical knowledge. Other gaps emerge elsewhere. Prominently, Moll seems to give a silent nod to cremation but without never really explaining how such a practice, with no biblical record, is best defended. Just how do we reconcile the Christian view of the body with cremation? Especially in view of the strong emphasis Moll gives to the sacredness of the body, replete with classic quotes such as “it is to save the body that Jesus came”.

Perhaps the main weaknesses of Moll's Art of Dying lie in what the book doesn't say. Moll largely presents death as an outcome of ageing. This is helpful for many people but it turns the book to be largely about ageing rather than death per se. The reason perhaps is related to a related weakness. This is an American book written without any global reference.

The examples and all the applications do not seem to recognise a world in the Global Sourh or East where the large majority of Christians live. Indeed for many Christians in the Global South much of what is contained there probably already takes. Funerals certainly are not parties. They are serious business and opportunities for healing and restoring communities.

But even within the western audience there's confusion on who is meant to read it. The byline suggests it is for those contemplating their mortality. The detail suggests this is for church leaders. There are exhortations for dying to be regarded as a spiritual discipline by the average Christian, but its by no means reads as a book meant to deepen spirituality practically.

None of that means that the book should be thrown in the bin. It is worth a read particularly for Christian leaders of western congregations where ageing is a problem. Its reflections on how the young can learn from the old are certainly worth reading. But perhaps it's key contribution is it is an opening shot for others to write a more global and more encompassing work.