April 01, 2016
In 1977, squatters in Freston Road, Notting Hill declared independence from the UK, after facing eviction by the Greater London Council (GLC). The squatters lobbied the UN and established a 1.8-acre microstate - "The Free and Independent Republic of Frestonia" - complete with its own postage stamps, visas and passports. 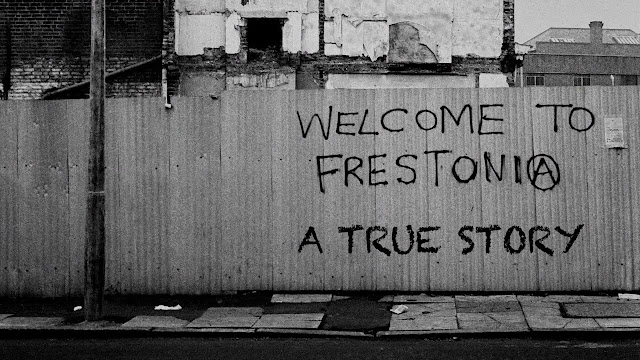 The 100-odd citizens of Frestonia varied from actors, artists and addicts to normal working class Londoners. Playwright - and one of London's first graffiti artists - Heathcote Williams was Ambassador to Great Britain. Actor David Rappaport was the Minister of Foreign Affairs. A two-year-old child named Francesco Bogina Bramley was the Minister for Education.

If the same thing happened today police would likely move in with eviction papers and battering rams. But back then, living in abandoned buildings apparently wasn't seen as the transgression we now know it to be. Shadow Chancellor of the Exchequer Sir Geoffrey Howe wrote to the Frestonians expressing his support, saying, "I can hardly fail to be moved by your aspirations."

In the end following international press coverage, the residents formed the Bramleys Housing Co-operative Ltd, which negotiated with Notting Hill Housing Trust for continued residence and acceptable redevelopment of the site. Some Frestonians were unhappy with the consequent loss of independence, and moved away. The remaining Frestonians grabbed what they could for themselves instead of maintaining the ideals of the Frestonian "nation" which consequently went into decline.

The internatiional popularity of the Frestonia debacle is undoubtedly owed to its funny nature. It is funny to think that some squatters instead of obeying the law decide to declare themselves independent! Part of this appeal is that is that there is in all of us this rebellious streak. The romance of acting contrary to what is expected of us, no matter how moral or legal those demands are.

This reality is perfectly described by the Prophet Isaiah, “All we like sheep have gone astray; we have turned—every one—to his own way; and the Lord has laid on him the iniquity of us all.” [Isaiah 53:6]. Isaiah is not just describing Israel, he is say all of us have abandoned God and are now living for ourselves. There is a sense in which all human beings have done a Frestonia, and our immediate predicament is how to free ourselves from Frestonia.

In a way this is the essence of sin. Sin is always about wanting my way, in my own way, and in my time. That is why the soundtrack to a sinful life, is the song that is played around at most funerals in the UK, Frank Sinatra's "My Way". As the final verse of that song says, “For what is a man? What has he got? If not himself, then he has nothing. To say the things he truly feels and not the words of one who kneels. The record shows I took the blows. And did it my way. Yes, it was my way!”

Whether we like Frank Sinatra or not, the truth is that we are all Frestonians at heart! We have all committed transgressions and iniquities. A capital crime against against God as the supreme authority. The consequence of our criminality is that we are now spiritually, emotionally and relationally broken people living under the sentence of eternal death. It is the legacy of human fall in Eden!

Yet, Isaiah has good news for us. The amazing thing is that God has not abandoned us! He has sent His Suffering Servant, identified later in the Bible as Jesus, to bear the punishment of our rebellion! God has reached out to us through Jesus, whilst we are sinners, and in Jesus has lifted us out of the empty pit of rebellion! God has laid on him the iniquity of us all who repent and turn to Him! So no more illegal squatting in the terrain of evil or holding to false comfort of spiritual Frestonia! Freedom has come in Jesus!