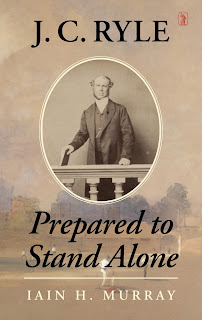 I just finished reading J C Ryle 'Prepared to Stand Alone' by Iain H Murray. This is first biography I have read on  J C Ryle. I enjoyed reading J C Ryle's book 'Holiness' so I thought I should read a bit more about the man himself. Here are seven things I took away from the book.

1. When Ryle was young, his father owned a bank which eventually collapsed and made the family bankrupt leading to some hardship. In his own words,"the immediate consequences were bitter and painful in the extreme, and humiliating to the utmost degree. The creditors naturally, rightly and justly, seized everything and we children were left with nothing but our own personal property and our clothes"

2. Ryle became a clergyman more out of forced circumstances than a deliberate choice. He says, "I could not see nothing whatever before me but to become a clergyman because that brought me in some income at once..." Elsewhere, Ryle says, "I became a clergyman because I felt shut in up to it, and saw no other course of life open to me". It seems God closed every other door in order to make it clear that this is only one open for him. God sometimes makes it easier for us like us like that!

3. Ryle was an avid reader of the puritans. He believed that every true minister should always be reading : "Men must read, if their ministry is not to become threadbare, thin and a mere repetition of hackneyed commonplaces. Always taking out of their minds and never putting in they must naturally come to the bottom. Reading alone will make a man full".

4. 1n 1870, the Vice Chancellor of Oxford University nominated Ryle to preach at St Mary's before the University. But he had to follow the invitation next day with the comment, "I find you are only a B.A". Oxford University regulations required clergymen to have taken the M.A degree before exercising such a function. Ryle decided to take the M.A in 1871 in order to preach there.

5. When he became the first Bishop of Liverpool, Ryle encouraged the clergy to take time to sit by the firesides of their people, hear their thoughts, and "speak boldly and faithfully" about the things of God. He envisaged an ideal parish of 5,000 people, in which only a third belong to the Church of England, and argued that his men should visit a staggering 105 homes every week.

6. Ryle believed strongly that the spiritual usefulness of ministers was related to a guarded use of their time. He reminded the clergy in Liverpool repeatedly that "the preachers who led the evangelical revival were not diners out". They were "not men who sought the entertainment of the great and the rich".

7. In his final farewell letter before retirement as Bishop of Liverpool, Ryle reminded the brethren never to neglect their preaching: "people will not be content with dull, tame sermons. They want life, and light, and fire, and love in the pulpit as well as in the parish. Let them have plenty of it...never forget that the principles of the Protestant Reformation made this country what she is".