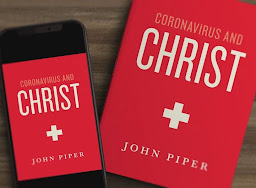 I enjoyed listening to John Piper’s recent short book, Christ and Coronavirus. I prefer to read rather than listen to something.  I have read some John Piper books which proved relatively dry. But given it is narrated by John Piper, it felt like hearing him teach, which is always engaging. I am glad I gave this a go because it is an excellent and time book with lots of wonderful things in it. Like this anacedote:

On January 9, 1985, Pastor Hristo Kulichev, a Congregational pastor in Bulgaria, was arrested and put in prison. His crime was that he preached in his church even though the state had appointed another man as pastor whom the congregation did not elect. His trial was a mockery of justice. And he was sentenced to eight months in prison. During his time in prison, he made Christ known in every way he could. When he got out, he wrote, “Both prisoners and jailers asked many questions, and it turned out that we had a more fruitful ministry there than we could have expected in church. God was better served by our presence in prison than if we had been free".

John Piper goes on to note that this is often how God works. We should regard the current global scope and seriousness of the coronavirus as too great for God to waste.  In his words, "it will serve His invincible global purpose of world evangelization".  This is certainly true. We this throughout history. For example, Samuel Lamb, a Chinese pastor who spent 20 in prison in China for Jesus says:  “Before the government confiscated our church, the church had 900 members. After the confiscation we have 2000. More persecution, more growing”.
At one point in China, imprisonment was so common for believers that they would typically find themselves in prison with other believers. Which led to small groups of believers in prison banding together for fellowship and study and then in turn share the gospel. Once these prisoners won converts among their fellow prisoners they would plant other small churches in various parts of the prison. Amazingly, there was a huge church-planting movement within China’s prisons! In those prison, countless new converts were discipled. Eventually they were released to return to home communities scattered throughout every region and province of the country. And as soon as they got out they either joined local house church or help start a new one. These house churches spread like wildfire across China. Today China which was closed to the world is now the largest producer of the Bibles.
The government realised it is losing to the Gospel. After a lull in persecution of believers, they started again last year. Clearly they have not learnt the lesson: persecution does not work!  I am reminded of a passage in Mark 13:9-11 where our Lord Jesus says “But be on your guard. For they will deliver you over to councils, and you will be beaten in synagogues, and you will stand before governors and kings for my sake, to bear witness before them. And the gospel must first be proclaimed to all nations. And when they bring you to trial and deliver you over, do not be anxious beforehand what you are to say, but say whatever is given you in that hour, for it is not you who speak, but the Holy Spirit".
Jesus wants His followers to see increasing persecution and suffering in the world, as working for the Gospel not as a sign the last hour of the last hour is upon us.  He wants us to know that He desires that all men and women should hear His gospel through our persecution. The fires of the Gospel cannot be damped out by the waters of human suffering.  Quite the opposite. The suffering of God's people adds fuel to the fire of evangelism.
Many of us think the Gospel spreads best when there is no suffering. So we pray for God to take away all suffering in the world. What Jesus is saying challenges that logic. He is saying it is through suffering for Him that His messages will be held by the world. The suffering of God's people is like smashing the atom: the unstoppable divine energy of the Gospel of enormous quantity and miraculous effects!
What this tells me is that we must be careful what we pray for when it comes to suffering. The disciples did not pray for their suffering for Jesus to end. They knew it that will increase with each year of living faithfully for Him. They knew to expect suffering as the means for God to work through us to share his gospel. So they prayed for boldness and courage so that through their persecution and other suffering they would be better witnesses and with greater scope of reach to share Jesus. That should also be our prayer as we live in a secularised western society and grapple with the suffering of  Covid-19.