July 12, 2014
I read earlier this year that work on Saudi Arabia's Kingdom Tower is expected to start later this year. It is being constructed by the same company that built London's Shard skyscraper. At the time of the announcement in February 2014, it was set to be the world's tallest with at 1 km, more than three times taller than the Shard. The owners believe it will be "a landmark building that will clearly demonstrate Saudi Arabia's ambitions to the world". 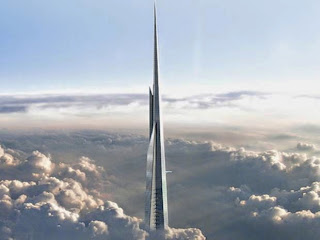 Well it turns out it may not be the tallest building. The City of Wuhan (China) is starting to build the Phoenix Towers also at the height of 1km. The project is expected to be completed in the next two years. The ambitious Phoenix Towers will be two towers themed on the traditional Chinese phoenix symbol containing two birds and representing a perfectly balanced union. The skyscrapers would feature the world's tallest kaleidoscope and vast 'planets' orbiting the towers. We have been promised "celestial restaurants" to go with it. But the Chinese are adamant that it is not their aim to go out in breaking records. 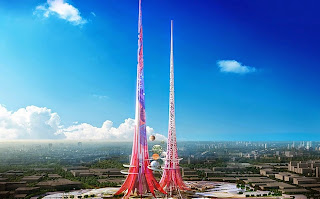 Architecture like all things reflects the tension at the heart of the human condition. There's a dichotomy between our basic, built-in understanding about the existence and nature of God and our inherent and total sinfulness that is a result of the fall of mankind in Adam.  As St Paul notes in his letter to the Roman church, this dichotomy results in darkened hearts and the suppression of truth.

Architecture is the prime example of this. The architecture we build communicates something about ourselves. They are not purely function. They communicate our emotions, aspiration and general outlook on life. More importantly as we shape the space around, this space in turn shapes us -  by connecting us more to the past, present, others and ourselves.

The quest to build the tallest and most eye catching building partly reflects the fact that God has given human beings the creation mandate. We are created in the image of God and have been given a special task of not only multiplying but also to rule the earth and subdue it. Human beings are to rule over creation by living out God's creative purpose and thinking God's thoughts after Him. Architecture at its best is an expression of that mandate. Therefore there's something God honouring about it.

It is also equally true that the Bible does not end at Genesis 2. It continues to tell us about the fall of human beings and the curse of sin. We chose to eject God from his place in our hearts. Now what remains is an empty void. The pursuit of ever taller buildings is an attempt to fill that void. The question is what is the people suppose to feel or take away once they see such a building? For the Kingdom Tower it is mean to leave us in awe of the wealth of Saudi Arabia. It is meant to beckon us to worship the power of money and man.

As for the Phoenix Towers, the designers have already made it clear they want to present the towers as a cosmos. This is ironic because all architecture are mini cosmos. They are unconscious commentary on our lives. They reflect the wishes, aspirations and experiences of life of the owner and users. We build because we are cosmic makers seeking to reorder our surroundings to create personal universes.

The lasting impression the creators of the Phoenix Towers want to leave us seems to be that we are the centre of the universe. In other words it too is very man centred. It enthrones man as the owner of the cosmos rather than God. As the lead designer says, "Quite a lot of this project is vanity...I picked up the colour pink from the sunsets and used a lot of metaphors. We wanted to really give it some oomph.”