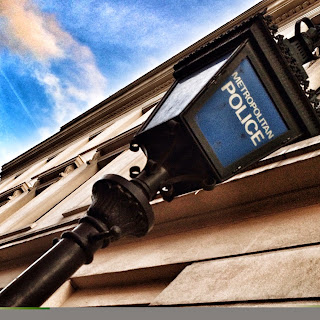 Kelvin Albertson has an interesting article where he argues that neoliberalism focus on self interest (expansion of economic freedoms) inevitably leads to increasing surveillance (reduction in social freedoms). In other words although society may be becoming economically freer it comes at the expense of less social freedoms. It turns out the free market actually imprisons :

The need for self-interested but free individuals to be constantly regulating each other to promote social good explains the seeming paradox that, as the state withdraws from the economy in line with neoliberal theory, its role in criminal justice expands. Where the actions of some have adverse social consequences, the state must attempt to disincentivise them through regulation and punishment. And this, of course, requires rigorous detection and monitoring.

In England and Wales, for example, the attempt to regulate behaviour has led to 1,472 new imprisonable offences being created by parliament between 1997 and 2007 alone. To encourage compliance, the UK has between 4.9m and 5.9m security cameras – the vast majority of them privately owned. This surveillance of public spaces is complemented by online surveillance.  Yet, despite all this, the UK is a relatively high crime nation and has the highest imprisonment rate in Western Europe.

The UK is not alone in facing this conundrum; there isinternational evidence that neoliberal states are relatively more punitive than nations which adopt other ideologies. This might be because neoliberalism is associated with higher social inequality and relatively poor welfare support, both, arguably, drivers of crime.

All states rely, to one extent or another, on ethics to check self-interest, complemented by criminal justice sanctions and intelligence. However, by emphasising self-interest pursued in free markets, neoliberalism discourages the former and encourages the latter. It all means that in an effort to promote overall social good – often interpreted as maximising economic growth – many of our freedoms and liberties may be compromised; our every step in the High Street can be watched, and every email scanned.

This is something that I have argued for sometime as another huge problem of free markets (the other problems include lack of morally neutrality and the perverse tendency to accentuate the worst rather than the best in people). Here Albertson rightly recognises that in a free market society built on self interest the penitential system can be expected to grow because it largely becomes an outworking of the market. It is the resolution mechanism between competing private interests forged in the fires of self interest.

What is interesting is that Albertson majors on the link to "private.  freedom" and the dwindling common ethos. People are encouraged to to pursue self interest without an overall link to a "social good" or the anchor of a "good life", as Skildesky would put it. This leads to a society whose only way of getting along is through increasing surveillance. Unfortunately the surveillance is not only private (i.e. internalised) but increasingly state mandated.

Incidentally taken to its logical conclusion, Albertson's argument seems to suggest that the libertarian posture of increased market and person freedoms seems rather mythical. You cannot have a small state with increasing reach of markets because someone has to be around to police increasing diverging personal interests in the ever expanding Darwinian monster.

One thing that surprised me is that Albertson does not seem to say  much on greed and inequality. It seems to me that this is the problem. The bigger problem is capitalism inherent propensity towards inequality. This tendency comes from the fact that economic power tends to beget political power even in democratic and pluralistic societies.

In some countries this works itself through campaign contributions and access to politicians that wealth and money tend to buy (USA, UK). In other countries the rich and political class are basically the same peoples (e.g. Saudi Arabia). The bottom line is that the rich wants to get richer and political power is the key to achieve their goal. So inequality will always worsen in high liberal economic societies.

Inequality makes individuals hungrier for goods than we would otherwise be, by constantly reminding us that we have less than the next person. We live in a pushy society with turbo-charged fathers and tiger mothers, constantly goading themselves and their children to "get ahead", while the poor languish at the bottom.

James K. Galbraith, in his book Created Unequal : The Crisis in American Pay, argues that when citizens have diverging access to services (due to income and social inequality) the result can be social and political fracturing. Inequality may endanger society’s ability to think of itself as a single entity or nation  :

“With high inequality, it becomes easy to know whether one is likely in the long run to be a net gainer, or a net loser, from public programs of family assistance, pension security, and health care. High inequality therefore weakens the willingness to share at the same time that it concentrates resources in the hands least inclined to be willing to share it. In this way inequality threatens the ability of society to provide for the weak, the ill, and the old”.

The result of this fracturing nationally is a growth in the penitential system. They can't have, says St James, so they steal from those who do. At the intentional level, inequality across countries leads to increasing cross border conflict and transnational groupings that seek to upset the status quo.

But there's even a important area that Albertson does not highlight. That is the tendency of markets to force a convergence between business and personal relationships. As Stu Shepherd said in the classic movie Phone Booth, "I have never done anything for anybody who couldn't do something for me". What he had in business he carried through to how he treated his wife.

The basis of free “market capitalism” is mutual exploitation. If one tried to live an honest and altruistic life in the modern business environment they would soon go bankrupt! Markets do not reward morality, they reward efficiency regardless of how that is achieved! As a result many resort to lies and more lies to make it to the top and this inevitably corrodes all other areas of life.

So what is the solution? Like many public intellectuals who are good at problem diagnosis but with little solutions, Albertson does not offer any. The answer of course is not to get rid of markets completely. The key I think is to recognise that the market system is a broken social arrangement that is only strengthened in the presence of a strong Christian moral framework that has placed the cross of Jesus, his self sacrifice, at the centre.

It is not enough to simply call societies back to objective moral values, as most public Christian commentators do, we must be clear which objective moral values would safeguard human freedom. Only a grace centred ethic that insists on self sacrifice, anchored on a transcendent self sacrifice in the person of Jesus Christ guards against human self interest. Christ is the solution to a market gone mad.