October 26, 2012
There's a powerful scene in a recent British movie Junkhearts, which tells a story of an ex-soldier Frank (Eddie Marsan). Frank is haunted by an incident in Northern Ireland where he accidentally shot a woman in a failed military operation. He lives a lonely existence drowning his nightmares with booze in a council flat in London's East End. One day he meets a homeless 16 year old girl Lynette (Candese Reid) whom he offers a place to stay. 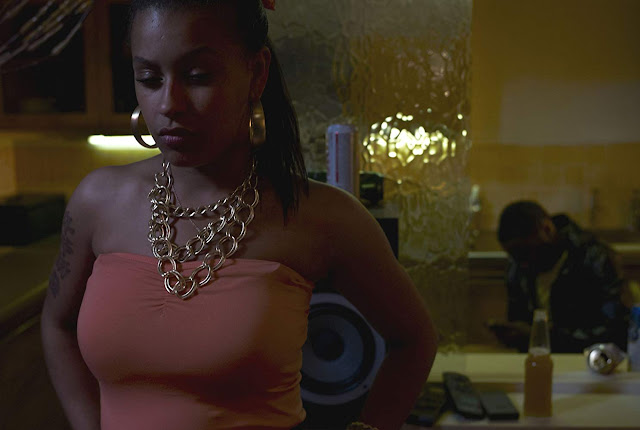 Unfortunately, after building a father-daughter camaraderie, it is rudely disrupted by the entrance of Lynette’s manipulative, violent and drug-dealing boyfriend Danny (Tom Sturridge). In the process Danny takes over the flat forcing the broken Frank onto the streets. A sharp reverse occurs with Frank now living on the very streets that Lynnett escape from, whilst Lynnette and her boyfriend enjoy his flat. As Frank remembers the memories he had with Lynette, he decides to come back for her, only to find her scrubbing the bathroom floor looking for drugs. It is then that the following brief exchange takes place:

Frank's response is emotionally overwhelming at many levels. For one thing, there's nothing about Lynette that is desirable or deserving of his generosity, let alone risking his life to come back and face Danny and his mob. A generosity magnified by Lynette’s self diagnosis that she is a “skanky bitch”.

Lynnette is clearly dirty physically. She is down in the dumps looking for drips of drugs on the bathroom floor. She has not washed for days. She is in the bathroom because next to the toilet is where she actually belongs. But she is also calling our attention to her moral dirtiness. She recognizes that she has been used and abused by Danny and left defiled. Her 16 year old innocence has been stripped away.

In that self evaluation she is also owning up to Frank that she has used and abused him. This is after all a young lady who Frank literally lifted out of the streets and invested money to give her a semblance of a home. In one moving scene he makes great effort to buy her teen magazines in an effort to help her reconnect with her  lost innocence. A kindness that she repaid with betrayal and blatant exploitation.

Though the movie deliberately leaves it undecided whether Lynette is firmly complicit with Danny or merely a victim, it really does not matter because morally she is both. She bears the blame for Frank’s predicament because it is her relationship with Danny that brings about the negative reversal of Frank’s fortunes. Yet, she is also a victim because she does not know better. Danny and his thugs is all she knows. She cannot help but to drag along her past into her present. It follows her like a shadow. Though she lives in a nice house with Frank, she is still in the streets and acts the way of the street. So when Frank is forced out it is not a surprise that Lynnette’s “junk heart” takes over and soon she is scrubbing the floor for drugs, among other vices! The steps that Frank took to help her reform in the end are not enough to create a new heart in her.

What is extremely remarkable is Frank’s response: "Look at me, why don't you tell me something I don't know?” We expect condemnation but it does not come. Frank never calls in the police on her. But also Frank does not deny she is a "skanky bitch". Rather he accepts her for who she is and willingly takes on the danger of rescuing her. And there's danger alright - he will be knocked and kicked by Danny before Lynnette can be rescued. Why does Frank do all these things? Self redemption. In saving Lynnette he is saving himself from the pain and guilt he has carried when a different life was lost at his hands. In the end our hero, and he is a true hero, is also a "junk heart" looking to another "junk heart" for rescue. Lynette has in a strange way become his salvation.

Lynnette and Frank's story therefore cannot be the ultimate ending. For it rightly points us to a deeper and more satisfying story. The more I reflect on this scene the more I realise that in many ways we too are like Lynette in more ways than one. The temporary eviction of Frank from his house by the behaviour of Lynette and her friends is really what the Bible calls sin.

Imagine you leave your residence in the care of someone. You trust her with all your possessions and then while you are away, they start behaving like they own everthing. They engraves their name on your letterbox. They plomp their dirty feet on your coffee table and invites her nasty buddies to sleep in your bed. They basically act like 'You don't matter, I’m running things now.” The Bible’s word for this is sin. Sin is not a regrettable lapse or an occasional stumble. Sin stages a coup against God’s regime. Sin storms the castle, lays claim to God’s throne, and defies his authority. Sin shouts, “I want to run my own life, thank you very much!” Sin tells God to get out, get lost, and not come back. Sin is insurrection of the highest order.

But the good news is that like Lynnette, though we were stuck at the bottom, dirty and alone, in the slimy and muddy pit of sin, God came looking for us, and set out feet on a rock and gave us a firm place to stand (Psalm 40:2). Jesus came to rescue us from our corruption through His suffering, like Frank. If the movie has any message, it is that we all need saving, including Frank! And thank God, that unlike Frank who may be courageous but still a junk heart, we have a Saviour in Jesus who is not here for self redemption but out of the abundance of His grace and mercy. He has come to give us life and life to the full. As the apostle John says, from him we have received grace upon grace (John 1:16).

The lesson surely is that human saviours are but a shadow of the self sufficient Saviour. It should not surprise us because though the world is fallen, we still see marks of its Maker. Imperfect pictures that reminds us of the real thing. Junkhearts reminds that we are all junk hearts and incapable of saving ourselves or one another – we need a new heart. But like Lynnette we must accept that we have reached the end of our ropes, for only junk hearts can receive his grace. To paraphrase Luke 5:32, Jesus said, “I have come to call not those who think they are righteous, but those who know they are junk hearts and need to repent."