Whose Reality Is It?

March 25, 2013
The critically acclaimed movie Another Earth is something of a hot bed of discussion among Sci-Fi fans. Opinion is sharply divided on what is depicted in the film. It appears that how one interprets the story depends on what you believe is the actual reality intended by producers. There are two plausible realities (or may be even more) and reviews differ accordingly. 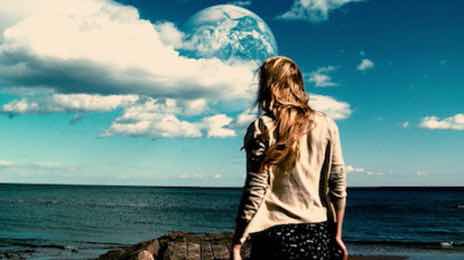 You know that story of the Russian cosmonaut? So, the cosmonaut, He's the first man ever to go into space. Right? The Russians beat the Americans. So he goes up in this big spaceship, but the only habitable part of it's very small. So the cosmonaut's in there, and he's got this portal window, and he's looking out of it, and he sees the curvature of the Earth for the first time. I mean, the first man to ever look at the planet he's from. And he's lost in that moment. And all of a sudden this strange ticking begins coming out of the dashboard. He rips out the control panel, right? Takes out his tools. Trying to find the sound, trying to stop the sound. But he can't find it. He can't stop it. It keeps going. Few hours into this, [he] begins to feel like torture. A few days go by with this sound, and he knows that this small sound...will break him. He'll lose his mind. What's he gonna do? He's up in space, alone, in a space closet. He's got 25 days left to go...with this sound. So the cosmonaut decides... the only way to save his sanity... is to fall in love with this sound. So he closes his eyes...and he goes into his imagination, and then he opens them. He doesn't hear ticking anymore. He hears music. And he spends the sailing through space in total bliss... and peace.

Thar of course is is exactly what Rhoda does in the film. She falls in love with the imagination and seeks to cope with the pain through it.
There’s much we can discuss on the moral implications  of  contested narratives of what is happening in the movie. But the main point is that what we believe to be true reality matters to everyone.The reason it matters is because we know every story, including our life story, has a designer. We also know the story is not randomly assembled by the Designer, it exists to communicate something. The design and designer gives us the sense of its true reality. Our problem is that we have multiple possibilities. Now it does not matter how plausible those explanations are, at the end of the day we feel empty at the possibility that multiple alternatives exists. What we really want to know is what the creator of the movie really thinks. We recognise that there can be no peace without that central perspective. When it is all said and done the reality that matters is of the designer.
What is true of the movie is also true of life! We may have myriads of intelligent explanations about the meaning of our lives. We may twist the truth of life about this and that. We may even live in denial and say that lives have no real reality. But at the end of the day the possibility that other explanations may exist trouble us. Relativism and post-modernism that opens to multiple streams of competing truths does not deliver peace, it delivers an endless search for answers. The reason the individual searches is precisely because we are reasoning about life. Ultimately what we are really looking to hear is the word from the Designer! We won’t be content until our view of reality has found meaning. The apostle Paul alludes to this in the Acts of the Apostles when he says :

From one man [God] made all the nations, that they should inhabit the whole earth; and he marked out their appointed times in history and the boundaries of their lands. God did this so that they would seek him and perhaps reach out for him and find him, though he is not far from any one of us. For in him we live and move and have our being.

Embedded the in the human consciousness is this search for God. In the end the only reality that matters is God’s and therefore we are not looking at our lives right unless we looking through his eyes. We are not thinking right about living, unless we are thinking God’s thoughts after him. He is the reality of all realities.