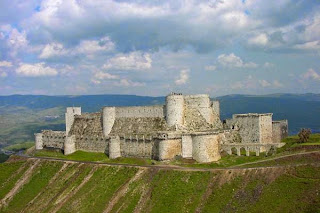 Krac des Chevaliers was one of the crown jewels of the crusader Latin kingdoms of the east. It was built as an Hospitaller stronghold by the Order of Saint John of Jerusalem to hold onto the gains that had been made during the crusades. It became crucial to the defence of the Crusader kingdoms between 1142 to 1271. While other Crusader strongholds were under threat from opposing forces, Krak des Chevaliers and its garrison of 2,000 soldiers dominated the surrounding area. It was  the centre of the Crusader defences  until 1271 and was the only major inland area to remain constantly under Crusader control in during the 13th century. Without the Krac des Chevalier all other kingdoms were vulnerable.
One of the images of presented of God in the Bible of God is similar to that of Krac des Cheveliers. The Prophet Nahum declares, "The Lord is good, a stronghold in the day of trouble" [Nahum 1:7]. God is a stronghold! Many of us live thankfully insulated from warfare and therefore the idea of a "stronghold" is alien to us. But in the ancient near east the idea of God as a "stronghold" spoke volumes about his character. God is one they could depend on - a shield or safe shelter in the time of trouble. An impregnable fortress that in our modern times can be compared to a nuclear bunker. He is not like those UN soldiers who failed to protect innocents during the Rwandan crisis or the Zambia peace keepers who run away in Sudan after the enemy was approaching. No, God is the ultimate refugee and fortress.
Prophet Nahum helps us to see fully the extent of God's protection. He says God protects us in "the day of trouble". In that scripture God's people faced the trouble from Nineveh. God reassured them that they can be protected from external attacks.  Much of our trouble in life is externally generated – it is beyond control.Indeed  Jesus said that troubles from the world are inevitable - "in this world you will face many troubles". God has never promised there will be no day of trouble! But he has promised to be our stronghold when we can't control things! In that "day" which means, that very moment! If we know Jesus we have a comfort only reserved for God’s people. The comfort is that is that our troubles have now become God's trouble. We have moved from a human shelter to God built shelter. From a man-made Camp Bastion to an heavenly and impregnable fortress forged by God himself. Physically we live on earth, but our protection is now from above. So how do we respond? As the writer of Psalms 91: "God is my refugee and fortress, my God, in Him I will trust".  God is now himself our protector.
Related Posts :