We Are All Prostitutes

August 31, 2012
There's a fascinating exchange in the movie Welcome to the Rileys that came to my mind recently. It concerns the 16 year old stripper Mallory and Lois Riley. 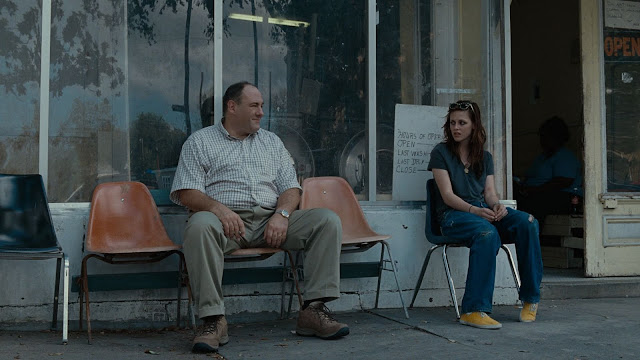 The two are not related. Lois is actually the wife of Doug Riley who has struck a friendship with the young stripper to try and help her reform. All part of his gathering of himself together following the death of his daughter  :

In the context of the film, Mallory does actually sell her body for sex. Indeed a vital part of the plot is that Doug is surprisingly not sexually interested in her, something Mallory can't quite get her mind around because all her life men have only regarded her as a sexual object. Mallory's argument here therefore is not that she does not sell her body for money. It is not even that she engages in sexual activity of this sort out of pleasure because she has already said, “you don’t work you don’t eat”. Rather her argument is that she is not prostituting herself because it is work! Work is not prostitution because it is an economic relationship like any other.  But hers is more than an argument about having a profession. What she is really saying is that she has chosen to work. She is not merely someone trafficked into prostitution, she has chosen to be in that position to earn a hard living for herself. She is an economic agent. So, who is Lois Riley to label her  a prostitute?

To tell Mallory that prostitution is wrong but the pursuit of greater choice and control over our lives will be a hard sell. It simply does not fit in with how the fabric of her life is woven.  What Mallory really needs is fresh understanding of the nature of "prostitution" and the extent of human choice.

First, she needs to know, as so does Lois, that we are all prostitutes. Prostitution is the exchange of our sacred parts in exchange for personal gain. All sin is prostitution. For in sinning, we violate the law of God embedded on our conscience for personal satisfaction. We exchange the image of God in which we are made for a lie. In fact it is quite interesting that in scripture when prostitution is severely condemn it is actually not in the context of sexual immorality per se, but usually due to financial plunder and general exploitation (e.g. Nahum 3). Indeed, it is the case that we are all selling something. The real question is : what are we selling? Is it the the sacred parts of ourselves? Is it those things that God has already said "thou shall not?" And this question must be applied not just to sexual relations but to all relationships God has placed us in. Many of us have sold our dignity to get promotions. Many have sold doctrine to build larger churches. Many have exchange marital intimacy with the satisfaction of pornography. Many speak ill of others so that they look better. And so on and on...We are all prostitutes.

Second,  Mallory needs to realise that not only are we all prostitutes, but we are all clients of prostitutes. In other words, we not only practice prostitution but our whole lives are built to encourage it! We are on the demand side of the prostitution equation as "buyers". If we take the entire economic system as an example. It is obvious that the greed that underpins western civilisation is fuelled by ordinary people. It is particularly interesting that in the wake of the current LIBOR rate crisis, the greed of banks has been thoroughly examined. But before that incident the greed that got us into trouble related to personal greed that manifested itself in inflated house prices and general credit problems. People selling themselves into debt to purchase lives they can't afford. Christians and non-Christians. All in the financial prostitution together.  Our market choices and the worship of better jobs. Bigger and better barns leads to more and more prostitution in many areas of life. We all need to check what we are buying and who we are buying from. And I don't mean things only, but ideas, attitudes and thoughts in general. Could it be that our lives are encouraging sinful activities in our homes, our streets, our politics, our world, our economy?  We need discernment to see daily the selling prostituting merchants that knock on the doors of our lives, beckoning us to do their bidding. We need to make proper choices that do not encourage prostitution in all its forms.

Thirdly, Mallory must accept that prostitution enslaves us all. Mallory believes she chose where she is and therefore she is not enslaved by her choices. But all prostitution enslaves because it makes us dependent on it for future sustenance  One does not have to be a moral expert to realise that across the land are  men and women who have violated their sacred trust and wondered into pornography, gambling, violent video game, alcohoism and many other things that plague us all. They have become imprisoned by these things. The danger of prostitution is that it is a potential slave master. Even if one believes that more choice is better, and that these choices are genuinely autonomous (doubtful), the consequence of exercising many of those choices leaves us with less freedom than before we walked in. Many of us walk about enchained to decisions we made years ago.

The answer of course to these three predicaments is that we need external help! Perhaps that is what Director Jake Scott is trying to get at in the movie.  We are all prostitutes who can't do it our own. In the movie, Mallory does get some help out of her predicament, despite her many protestations. She gets this help through the unconditional, unreciprocated love of Doug Riley. Yes, that imperfect Doug who have cheated on his wife earlier and prostituted himself to a life of gambling. It is his genuine, non-sexual, concern for Mallory that begins to get Mallory thinking about the life she lives. And of course that is the message of the gospel isn't it? We can't do it on our own. We need a Saviour. And someone far morally superior and more loving than Doug is here! Jesus Christ, fully God and fully man. He understands our prostitution and has paid a full price for it, with His own blood! As a friend adds, we are Gomer, the prostitute who marries Hosea. God has sought out us and given himself unconditionally to us in Jesus Christ. In the words of Richard Strauss, we were "ragged, torn, sick, dirty, disheveled, destitute, chained to an auction block in a filthy slave market", a repulsive shadow of what we were originally meant to be. But God in his great act of undying love has reconciled us to himself!